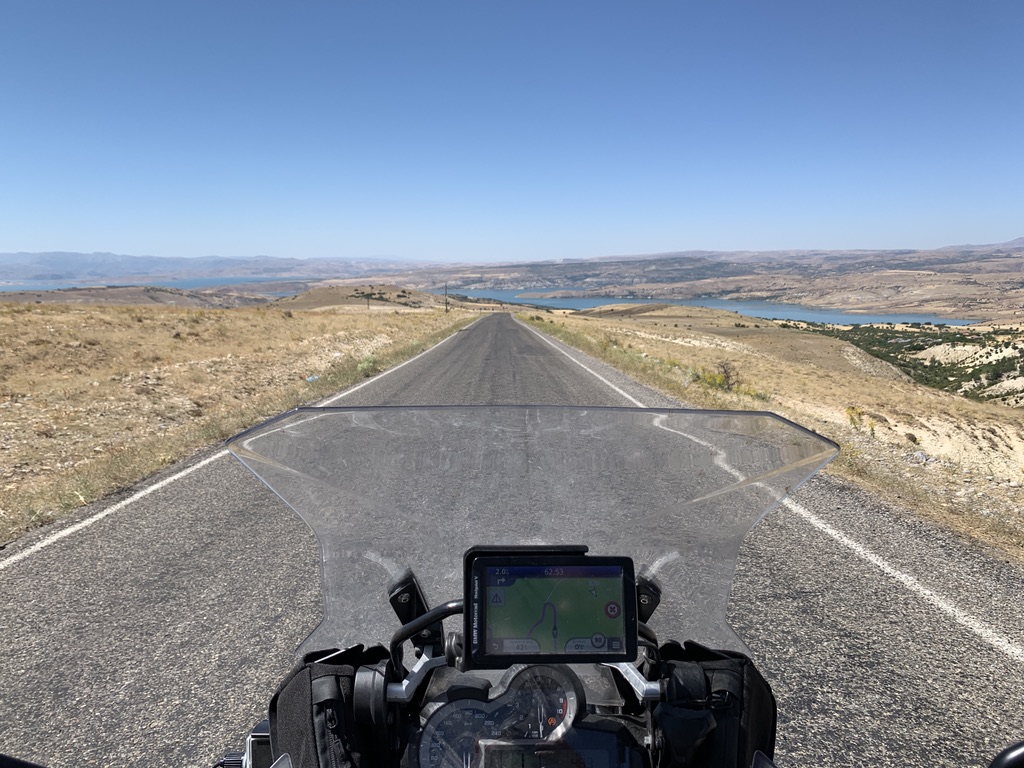 From Kemaliye I leave for the South. The first few hours follow in the river Euphrates. The higher I get the better I see how the river feeds the surrounding landscape with water. The mountains are brown, dry and reddish, but where the soil has access to the water it is green and there is a lot of growth. With a number of water management projects, the government has ensured that agriculture can take place. I come across a number of dams that apparently regulate the water levels. All in all, it is fascinating to see the river from above.

Eventually I arrive at a number of large lakes and I take the ferry to the other side, motorcycles are free and the ride takes about 20 minutes. Before I arrive at the ferry, I also encounter the first (of many) military checkpoints. In the south I think it has more to do with the threat of Syria and Iraq, but the further east I get with the Kurdish situation, I haven’t really studied it. The checks vary from a simple check of the passport, to a complete road closure with armoured cars and men with very large guns. In general, I am quickly assessed as a tourist and the conversation is more about my trip than anything else.

I spend the night at a ‘campsite’ on Lake Van. At the end of the day I go by boat to an island with an ancient Armenian church. It was a nice break with Kurdish music and dance on board. I also met a bride and groom. Back at the campground I ate something together with the manager, I was the only guest, I swam in the lake for a while.

The next day we continue and now it’s normal to see 37 degrees on the display. The visor of the helmet can’t be opened anymore, it’s like someone is blowing in your face with a hairdryer. Regularly drinking and it is not uncommon to be invited for an çay by the tank clerks. I actually want to go further south and drive the border road with Iraq but it’s just 45+ degrees during the day. I am already struggling at 35 degrees so I drive more to the east than to the south. Near the city of Doguubeyazit there are a lot of military vehicles at the entrance. I am taken apart by a man in civilian and he asks me what my plans are. He urges me not to spend the night in the city, too dangerous. I think it is a Kurdish stronghold (with which there is nothing wrong) and the Turkish glasses of the man in plain clothes are a bit coloured. Anyway, I have a bite to eat in the centre, have some animated conversations and leave the city, it’s too early to spend the night anyway. About ten men are standing by my bike and want to know how much it cost. Well, the language barrier is too big for a nuanced answer, so I shrug my shoulders, laugh and give it my all.

The next few days I will be driving along Mount Ararat, according to tradition the mountain where Noah and his Ark stranded (I do wonder where he got the polar bears from there with this heat). A high mountain that rises from the plain with a white snow cover. The mountain dominates the landscape and later I will see the twin mountain in Armenia as well. Because of the tensions between Turkey and Armenia it is impossible to cross the border here. The distance to the Armenian capital Yerevan is about 50 km as the crow flies, but it takes 600 km to get there.
I visit a 1200 year old Armenian city (deserted), very nice but walking around in your 35 degrees bibshorts is not too long.

It is slowly becoming time to leave Turkey and I choose to take a small border crossing in the mountains with Georgia. I assume that it will be quiet and that turned out to be true later on. At the border crossing I first pay a fine that I had received in Turkey and arrange the stamping and then the stamping in Georgia. All in all an hour’s work, not bad. I have breakfast, exchange the Turkish money and a little later I find a telecom shop for a SIM card. All ready for Georgia and Armenia.