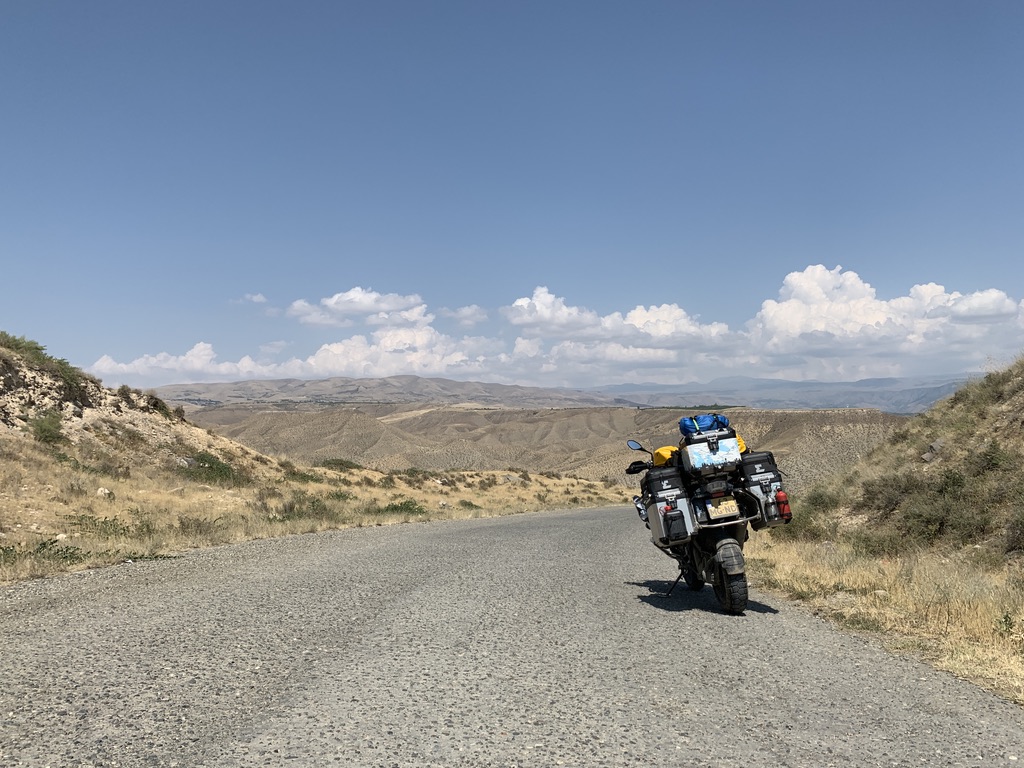 When I write this, it’s been eight days since I left Turkey. After crossing the Georgian border I sat down at a river for a nice cup of homemade coffee. In the end it was so good that I sat there for at least 2,5 hours, read a bit, listen to some music and have a cup of coffee. Eventually I drive on to the village of Achalkalaki, pronounced as ახალქალაქი. The Georgian script can’t be made at all but fortunately the signs next to the place names also show the names in the normal Latin alphabet. In Achalkalaki I buy a sim card and decide to spend the night at a campsite in Bordzjomi. I get to eat there and drink Vodka with two men from Azerbaijan (strange).

I wake up the next one to be surprised by the English neighbours with a nice cup of coffee. We talk about traveling and their 2 year old daughter who is on the road with us, they clearly have to get used to it 🙂
I had already decided to drive on to Armenia, in the meantime I have been travelling continuously for three weeks and in Armenia there is a Dutch B&B where I want to ‘rest’ for a couple of days, it all has to stay nice. On my way to the border I visited an Armenian church and around 14:00 hours I am at the border.

It’s all very unclear and especially the temporary import for the bike is a bit of a problem, everyone says something different but the result is that I don’t have to pay anything and everyone is happy with the form and the stamp of the neighbour. The bike is officially (temporarily) imported and I drive on the Armenian road network. These ‘roads’ are notorious and I like to keep my speed down. I buy another Sim card and some local monetary units, and start driving. The road can go from beautiful road surface, to large holes, to completely unpaved or a combination of all three, without prior notice. I had seen a campsite on the map and I drive there. The last 500 meters steep uphill with hairpin bends, holes, cows on the road and so on. I enter the campsite and there is a Landrover with a Dutch registration number. It turns out to be from Casper and Laura, a young couple from Alkmaar. The sausages have just been cooked, the salad prepared and the wine opened. In other words, good timing. A pleasant evening with exchange of experiences and around 23:00 nice tent in.

The next day I drive on to the Dutch B&B near the capital Yerevan. Sandra welcomes me and soon I sit at the table with a beer with Bill and Maggy, an older British couple (Landrover) and a somewhat younger German couple, Guido and Annika, also with a Landrover. They all cook and the atmosphere is good. Nice to speak to some other travelers (overlanders). I stay a total of three nights and do the laundry, clean the motorbike and mainly don’t do much more than hang out at the swimming pool and drink beers in the evening and BBQ’s together. There is also a Dutch family visiting. When they hear that I want to send some superfluous stuff home, they offer to take this with them for me, absolutely fine. I say goodbye to the kitchen, because it is easier to find something to eat somewhere than to find ingredients. Also some clothes are returned, I keep one pair of trousers and one pair of shorts. I do keep the roaster and the kettle so I can make my own coffee and possibly prepare an emergency meal. 10kg lighter.

Tuesday I say goodbye and in one day I drive back to Tbilisi, the capital of Georgia. On the way I have a nice short meeting with an Iranian family, a piece of melon with them and made some pictures. In an overlanding hostel I move in and meet James and Jay, two Australians who are on their way from Sydney to London by motorbike. When I arrived Jay had just repaired his bike with a part they had to wait two weeks for. So I was just in time for the big moment the bike was going to be started. It actually ran in one go. They started packing a lot to be able to leave immediately, after two weeks of sitting still. James starts his engine, at least that’s what he tried, engine didn’t start and after an hour they found out that the exact same part of him had died, so another week of waiting. James and Jay also met Bill and Maggie and we decided to have a nice dinner with a beer.

I did a day in Tbilisi sight seeing and on Thursday I picked up a new rear tire from a dealer in the city. The kilometers go very fast and if it goes on like this there is no profile under my rear tire when I arrive in Tajikistan, and that is where I need it extra badly. So I bought a new rear tire, I can’t get it any further on during the trip, tied up on the back and left for the Russian border. Very nice ride with lots of photo opportunities. Just before the border I put up my tent in the garden of a guest house and take it for the next day to leave early for the border.