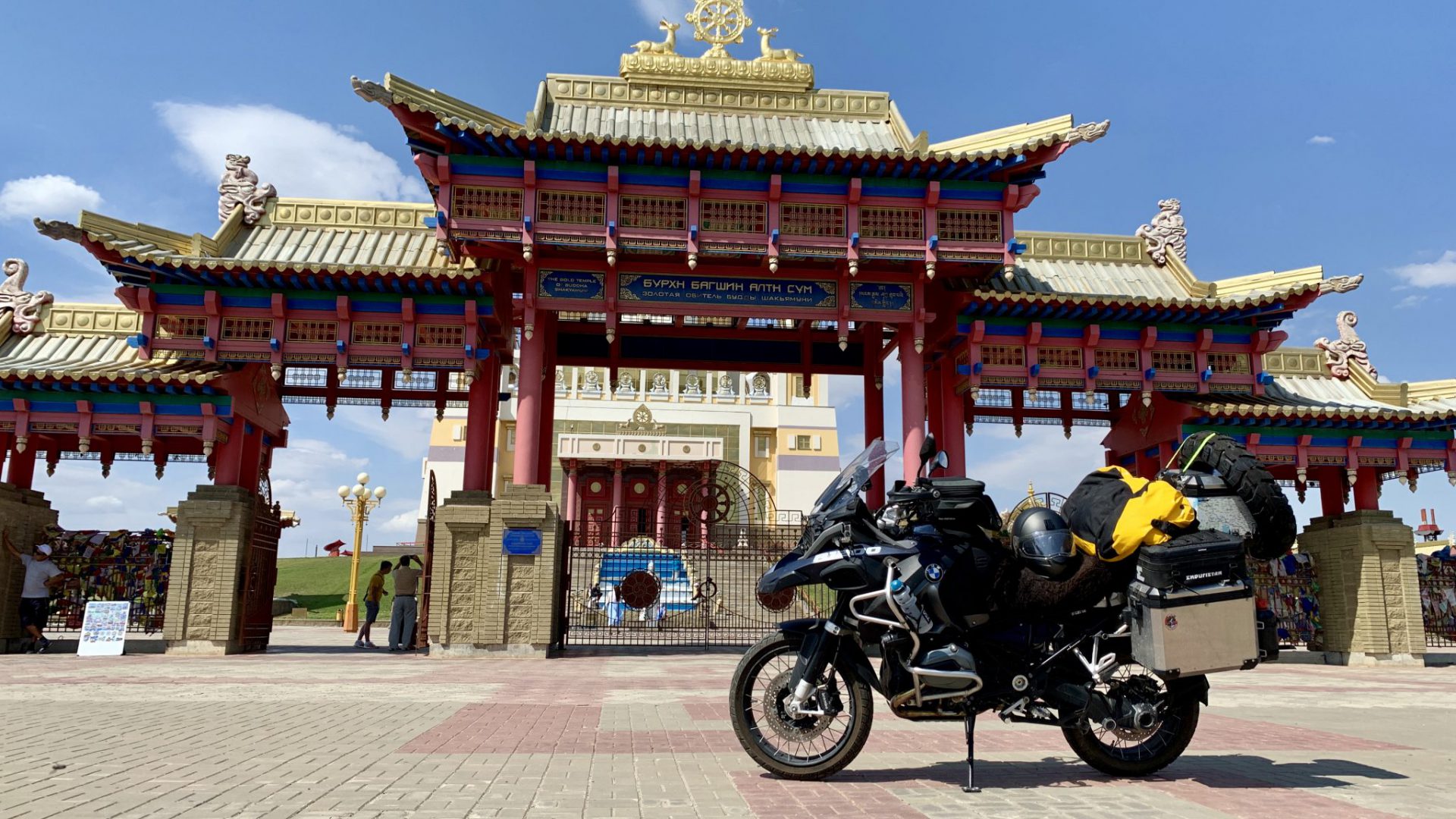 The border crossing with Russia was quite easy. It’s strange that nobody who works at such a border-crossing speaks even a word of English. Or that someone came up with the idea to put the process on paper in English. Every time someone doesn’t speak Russian again, the whole hands and feet of the circus start all over again. Now it’s not that complicated but if you don’t know where you’re in the process, it’s pretty confusing. Everyone disappears with a part of your papers in a different direction but eventually everything ended up on its feet. The bike has to be imported temporarily but fortunately I had downloaded, filled out and printed the right forms on the internet beforehand, which helped. Eventually I found myself back at the Russian side of the barrier, checking if I got everything back and time to change money and get a sim card. Money just came out of the machine so that was easy, the sim card was again a story.
In one of the currency exchange offices you could apparently buy a sim card. A kind of office with all chairs and 1 desk. No counter with bulletproof glass because of the amount of money but just about 6 men who were continuously rotating money, at least I didn’t understand a thing about it. It looked more like a ball than a foreign exchange office. In between someone helped me with a sim card. During the activation of the card the money stopped rotating, apparently the money had run out. In the corner a man was sleeping under a blanket on a sofa bed. That bank was lifted and underneath it came a huge (really huge) pile of money. The men could go on again and so could I with a working card.

The road in Russia was quite busy, a lot of traffic to and from the border. Also a lot of police and a single military checkpoint. Also in this area there are some border/grouping conflicts. You see the police on the side of the road too often to fine someone. It didn’t take long before it was my turn. I stopped somewhere to have lunch, restaurants on both sides of the road. I crossed the road with the bike and went over a half continuous line. You could cross the road from one side to the other but not the other way around (logic?). Formally I was wrong and immediately the police stood next to me with a tear-jerking story that I had put about half the province in danger. This all went a bit with Google translate and I soon realised that he didn’t want to write a fine but just wanted to see money. The well-known tactic of dumb dicks was applied in English and at some point he was apparently so fed up that he walked away disappointed. I had a cup of coffee and waved to him and drove away.

The next day I left, without breakfast and had planned to have something to eat on the way. I didn’t see any restaurants, so I went into a supermarket in a village to buy some fruit and stuff. Outside I was met by a Russian (Vitalo turned out to be later) who wanted to know what I was made of pan, so let’s have breakfast. It was not an option for him that I would eat on the sidewalk and I had to and would go with him to his house. Fine, his wife also got in and I drove after him to his house. In the kitchen also met three daughters and the oldest of 16 spoke good English. Soup, bread, fish, cheese and much more were put on the table and Vitalo had breakfast with them. I think he had already eaten but he just liked it very much. After the coffee I told him I had to go on, he understood, but he would have liked it more if I had stayed over. What a great family. Not taking a shower, is it? I took some pictures and left a present for his wife.

The following days I mainly made kilometres to get through Russia and Kazakhstan. As far as motorcycling is concerned, this is the ‘most boring’ part and I want to get on with it quickly. The border crossing with Kazakhstan is problem-free but you can see from everything that you have ended up in a less prosperous area. A bridge over a river is made of pontoons and the road from the border to the first town in Kazakhstan is worse than bad. Most of the day I cover a distance of 200km, with large parts in first and second gear. People are very nice, sometimes I don’t have to pay for my coffee and when I’m overtaken almost everyone takes off throttle to ride up together for a while and raise their thumbs. Of course they see on my license plate that I come from far away and you just don’t see this kind of bikes here. In the city the horns are too drowsy, everyone is waving and as far as I can I put my thumb up or horn back.

Getting money was another story in its own right. Finally I found an ATM in a small town. A small crowd of 30 is waiting. Turns out to be the only device in the whole area and he is out for a while because someone is on the inside refilling money J Duurde eventually 45 minutes but I had my money.

I enjoy driving through the countryside. It doesn’t bother me at all that I don’t see or skip the local tourist things (if there are any at all). A moment in a supermarket to buy something gives you a glimpse of how people live here. I like it more than the umpteenth church, mosque or temple. Occasionally I take something with me but the main thing is to travel through the landscape and to be a little bit part of how people live here. The nicest contacts are often those in the normal restaurants along the side of the road. Often tents that in the Netherlands would have been closed for a long time by the inspectorate of goods. The map of the route on my top case is worth its money. The conversations are over and over again about where you come from and where you go. Because of the lack of English the map helps enormously. The endless kilometres through the desert and steppes of Russia and Kazakhstan seem very boring at first sight. But locked in my helmet I look around, take in everything and don’t get bored for a minute. I realize more and more that as a tourist you see what you’ve come for, as a traveller you just see what you see (well-known quote).

Tomorrow into Uzbekistan and then the pace will slow down a bit and there will be room for a bit of culture again.