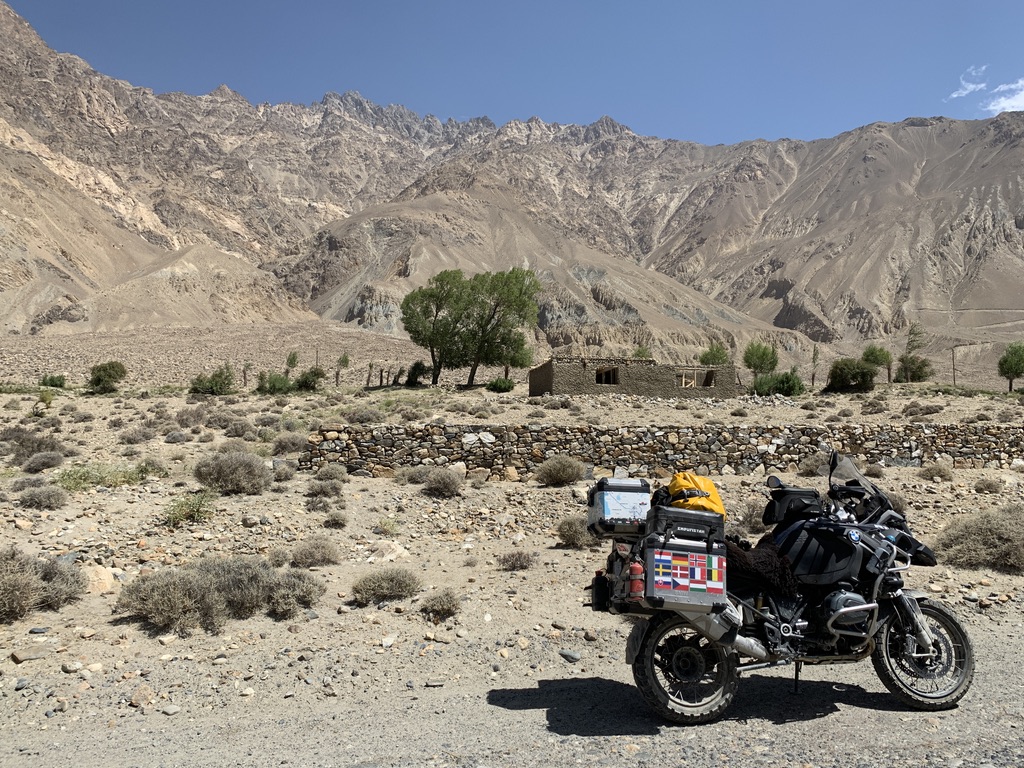 The few days in Dushanbe, the capital of Tajikistan, were fine. A nice hostel with many travelers and a moment to wash some clothes, change tires and make plans for the coming week. The plan is to drive the Pamir Highway and make the loop through the Wahkan Valley. Actually the next few days follow the border with Afghanistan and then the border with China. I meet Heejun again, a South Korean whom I also met in Uzbekistan. Especially the Wahkan Valley is an area far from civilization with very bad roads, no mobile network, petrol and villages, so we decide to drive this route together.

We leave Dushanbee and after a few hours of driving we climb up to a plateau of 2,000 meters. It is bleak, barren and little to see. Until we descend on the other side of the plateau, into a valley. The view is breathtaking and difficult to describe. We arrive at the river that will be our guide in the coming days. It’s a matter of keeping the river on your right hand and it’s going well. We can also take a first look at the other side, Afghanistan. The river is not wide and with a little effort you could throw a stone into Afghanistan on a small part. The road is absolutely fantastic so we have plenty of opportunity to look around and take in the landscape, we stop a lot to take pictures. Here too the light becomes more beautiful as we arrive later in the afternoon and the mountains look like gold.

We spend the night in a small hamlet and drive the day after to Khorogh. The road is simply terrible. We had already been warned, so we left extra early. The bikes have a hard time with all the holes, stones, sand and ridges. After a long day we finally reach the hostel where a lot of travellers stay. We meet a couple of motorcyclists we’ve met before and the day ends with a beer. After a rest day we visit the Afghan market on Saturday. The people on the other side of the river live so far away from the rest of Afghanistan that they have to go to the shops in Tajikistan. Once a week there is a market near the bridge on Tajikistan’s territory to which the Afghans have access, but they are not allowed to leave the market. Here they can sell their stuff and do their shopping. The Tajikistani don’t have much but by their standards the Afghans are really poor, they have nothing to little.

At Khorogh the Pamir Highway (M41) really starts but we take the loop through the Wahkan Valley. The first day the road is still reasonable, sometimes asphalt and now and then a hamlet. When we stop at a certain moment to take a picture I see a man on the other side of the river squatting in the field. I think he was about 200 meters away from us and 50 meters lower. I whistle on my fingers to attract his attention and wave. He swings back, gets up a little later and walks towards the river. I see him picking up a stick and in the river’s sand bed he starts writing in the sand. Moments later, in large letters, “Welcome” was written by the name of his village. Heejun and I spontaneously start cheering with our hands above our heads. We waved one last time and drove on. What a meeting!

The south side of the valley has a number of hot springs. Around 16:00 hours we took a nice hot bath with some locals. I haven’t felt so clean in weeks. The fact is that the moment you put on your suit and touch your bike your hands are black again. Everything is covered in dust and cleaning is a hopeless business. Gradually I start to get dingy, probably it will be home before all the dirt is gone. Because of the bath it had become later and when we were back on our bikes it soon started to get dark. In the meantime we hadn’t seen a house or anything of civilization in an hour. In the dark we found a flat piece of land and set up our tents, we were now at an altitude of 3500 meters. The starry sky was indescribably beautiful again and the galaxy was clearly visible. We made some tea and warmed up some noodles and got in on time.

The morning was heralded by a shepherd with his flock of sheep. Made tea, had breakfast and was on the road again. What used to be a bit of a road, now became a narrow path with many challenges. Several times stuck in loose sand and then it’s very nice that there are two of us. The highest pass was 4300 meters and the engine delivered tangible power. Now most of the time I couldn’t get any further than the second gear, at most third gear, so no problem. High in the mountains we ended up at a military checkpoint, a man alone in a concrete house. He was apparently happy to see someone again. More than ten men a day won’t pass by here. We were now two days away from reasonable civilization, I mean shops, hotel, hospital etc. I took a selfie with the soldier and went on. The pace was low and the last 20km was almost at walking pace so bad was the path.

Around noon we reached the Pamir Highway again, asphalt, no bumps, transfer to 4, 5 and 6. What a pleasure! At the intersection a car and five youngsters stopped. Loud music and plenty of dancing, of course we had to dance along…

The Wahkan was an experience. Heavy but absolutely worth it. On this route we didn’t see any more four wheel drives in which tourists are driven around. I think I’ve never been so far from civilization and still felt 100% at ease. Somehow I hope that there will never be cheap flights to this corner of the world. That the roads are never built properly, that you have to make an effort to get here. The reward is then great. When you are flown in and driven in an airco 4×4 on neat asphalt, the landscape is no different but the feeling is. I say goodbye to Heejun who has to go on to reach Mongolia in time, my travel speed is slower. Nice to see how you can become so close in a few days, I don’t think I’ll ever forget him. The next few days I’ll sneak into the book at all the military checkpoints to see if he’s passed by.

The coming days I will follow the rest of the Pamir Highway and drive along the border with China, eventually I will drive into Kyrgyzstan at the second highest border crossing, more about that later.