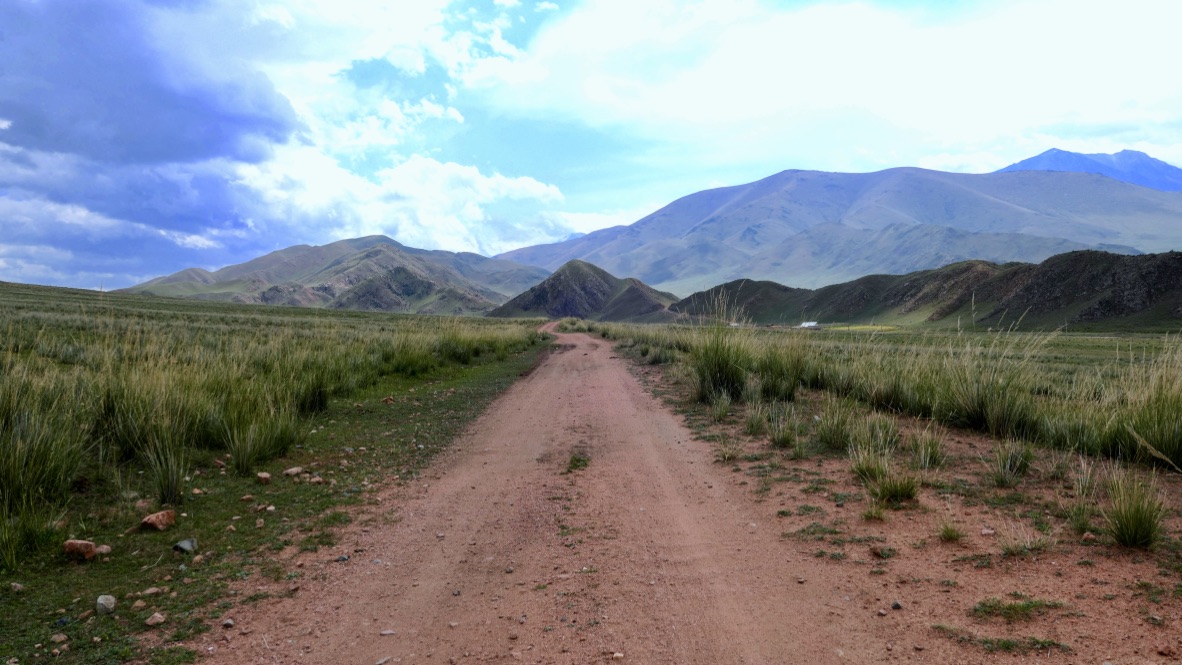 After the Waghan Valley, Murghab seems to be a stopover for all kinds of travellers. It is a dry and barren village, only in the summer it comes to life. In winter the meat of your bones freezes and the strong wind is always present, a hard life for the inhabitants who live far away from everything. Today’s group of travelers is varied. For example, there is a Chinese person who has been alone on a tandem bike for 10 years with the aim of picking up a woman somewhere, perhaps time for a different plan. A Spaniard who has been on the road with his bicycle since 2001… Two Italian men on a tandem of which the rear is blind. A Romanian who seems to be a bit out of control, he has bought an old bike in Mongolia and found a lady in Kazakhstan who rides with him. I do my best to bring the average a bit back to normal, I don’t really succeed.

Most motorcyclists have come from the Waghan Valley with motor or mechanical problems and it’s busy at the local key fitter, you can’t really call it a garage. I take a look after breakfast. From the Romanian, almost all the trunk and steering supports have been broken loose, so there is a lot of welding going on. Two Spanish students have rented bikes in Bishkek, the list of defects is too long to mention. One of the two bikes has definitively passed away and they decide to continue on one bike. That engine leaks oil on all sides but if they can get to Osh, they can exchange it. With the weight of the luggage they never get over the passes. I take care of part of the luggage and the three of us drive in the direction of Kyrgyzstan.

Less than 10km outside Murghab and the two men go down, the front fork is slightly bent and the two of them can’t ride anymore. The passenger arranges an elevator and we continue with two engines and two men. The Spaniard’s engine loses a lot of oil, but with its reduced weight it slowly but steadily pushes up the passes. My bike is doing well, no matter what I throw in. I ride this route on 80 octane but the bike doesn’t shrink. Even on steep climbs it’s just a matter of accelerating and it goes. We continue to climb and the Ak-Baital pass slowly comes into view. Not the highest pass in the world, but it is a good competitor. I keep an eye on the Spaniard but sometimes he doesn’t go faster than 30 km/hour. At 4655 metres, the top of the pass, his friend and his hitchhikers are waiting for us and of course we all stop for the photo opportunity. I still write my name on the nameplate and we go on, it’s getting cold.

It’s a lot easier for the Spaniard to go down and we have a good speed on the unpaved road. We drive tens of kilometres along a fence that indicates the Chinese border. We stop for a picture and drive on again. Until we suddenly see a big hole in the fence. We brake at about the same time, grin at each other and without making an appointment we step through the fence one by one for a picture, just like small children.

We stop at the Karakul Lake to spend the night. This lake is situated at an altitude of 3,645 metres and has been frozen stiffly all winter. The friend of my Spanish travel companion arrives as well, we find a guest house and unload the engines. There are also three British and together we tackle my bottle of rum, and with success.

The Spaniards want to leave at 07:00, not me. So we say goodbye and because the road mainly goes down they will be fine. Only the pass at the border, but if it doesn’t work I’ll meet them. I leave around 10:00 am. At my leisure I reach the world’s second-highest border post, the one with Kyrgyzstan. The border crossing is so remote that they don’t even have a computer, everything is written down by hand in a big book. Some electricity comes from a few solar panels and the shed is heated by a wood stove.

The stamping out of the country is done without any problems and I drive into an area of 20km which is no longer part of Tajikistan but also not yet part of Kyrgyzstan, no man’s land. The road is bad but I am in no hurry and in the end the Kyrgyzstan procedure also goes without problems. However, I don’t feel well, headache, pain in my stomach, general rickety. It wouldn’t surprise me that the height also plays a role. Last week I have been in continuous between 3500 and 4500 meters. I decide not to drive too far and find a guest house for the night. They must not have found me the most sociable guest ever, but I just didn’t feel comfortable in my skin. The next morning not much better and also restless. I decide to drive to Osh and take a few days rest there.

On the way I stop at a river and put my seat on and make a cup of coffee. I am already much lower than in Tajikistan and notice that the headache is gone. I sit in the sun and the coffee tastes good. Pensively I realize that the unrest is caused by the lack of a plan for the coming weeks. I was so absorbed in the Pamir and Wahgan Valley that I didn’t even think about what to do after that. I sit at the river for two hours and make a plan and leave with an excellent mood, so you see.

In an Osh I take up residence in an overlanders hostel and run into several acquaintances during the three days that I stay there. Also the Italian couple on one motorbike who have been in Afghanistan. I also considered it but had to wait a week on the spot for a visa and it would cost about 500 USD. Security is not an issue there. We exchange stories and I’m glad I didn’t miss too much. We go out for dinner with a group. I do the laundry (drop off at the reception) and some shopping and leave after three nights with a lot of enthusiasm in the rest of Kyrgyzstan.

At the end of the first day of travel I find a nice spot at a lake. Nobody is around and I put up my tent, warm up a meal and enjoy the evening sun. A couple of fisherman and two men on a horse come to have a chat and when it gets dark and cold I dive into my tent. It was a nice day, good asphalt, beautiful canyons and landscape and I had a coffee with two Turkish motorbike colleagues.

The next day is just to accelerate and I cover 480km to get to Issyk Kul lake. The road is beautiful and varied. I decide to skip Song Kol lake, this is at an altitude of 3500 meters and as I said it’s getting cold at altitude. Later I heard that it had already been -17 degrees that night. On the way I meet many shepherds who are bringing their cattle to lower ground. Whole flocks of sheep, goats, cows but also horses sometimes block the road. When they meet you it’s just a matter of standing still and they’ll walk by. If you get them on the back of the herd, it’s easy to maneuver them through the herd. Many shepherds are on horseback, you can see that I Kyrgyzstan the horse is just part of everyday life.

Issyk Kul is a very big lake and I decide to ride around it. From Bishkek about 1.000km. In comparison with Tajikistan the roads are very good so it gets more touring and looking around you. On the south side of the lake there are some beautiful valleys that I take along in the route. The lake on the north side is mainly a holiday resort for Russians and Kazakhs, so much more touristy than I was used to up until now. Because the season is over it sometimes looks like Zandvoort aan Zee on a Monday morning in January.

On the way back to Bishkek I leave early one morning to make some distance. The road is almost deserted and I drive a bit faster than usual. I do try to keep to 60 in the villages because I know that the police check the speed here. I have seen a lot of these checks the last few days, the police put 4/5 cars aside and try to take some money from everyone for their own profit. The stop signs are unclear and my strategy so far has always been to look a bit different and just keep driving. If there is a row of cars they won’t come after me anyway. This worked fine, so far. The road was deserted, I drove on and I don’t think I was in a 60 km/h area. A policeman with a laser device suddenly stood in the middle of the road and gestured to me to stop. I was the only one so driving on wasn’t really an option. Stopped, helmet off, friendly laughing the man a hand given. He indicated that I drove 80 km/h, which could be true 🙂
I had to go to his car where he showed me a table that I had to pay 5.500 Som (about 70 euros). I started laughing very hard and judging by his reaction he thought it was funny. His colleague walked away demonstratively and the officer opened his glove compartment. He indicated that if I put something in there he would forget everything. OK, how much then, 3,000 Som he indicated. I laughed again and after a long time to and fro I gave him 1,000 Som (13 euros) and got my papers back. Probably still too much but I also wanted to go through….

After Bishkek I go into Kazakhstan for a few more days to visit the city of Almaty. I stay there for the weekend to be in a normal city again after two months in the ‘jungle’. After that it is back to Bishkek and home….