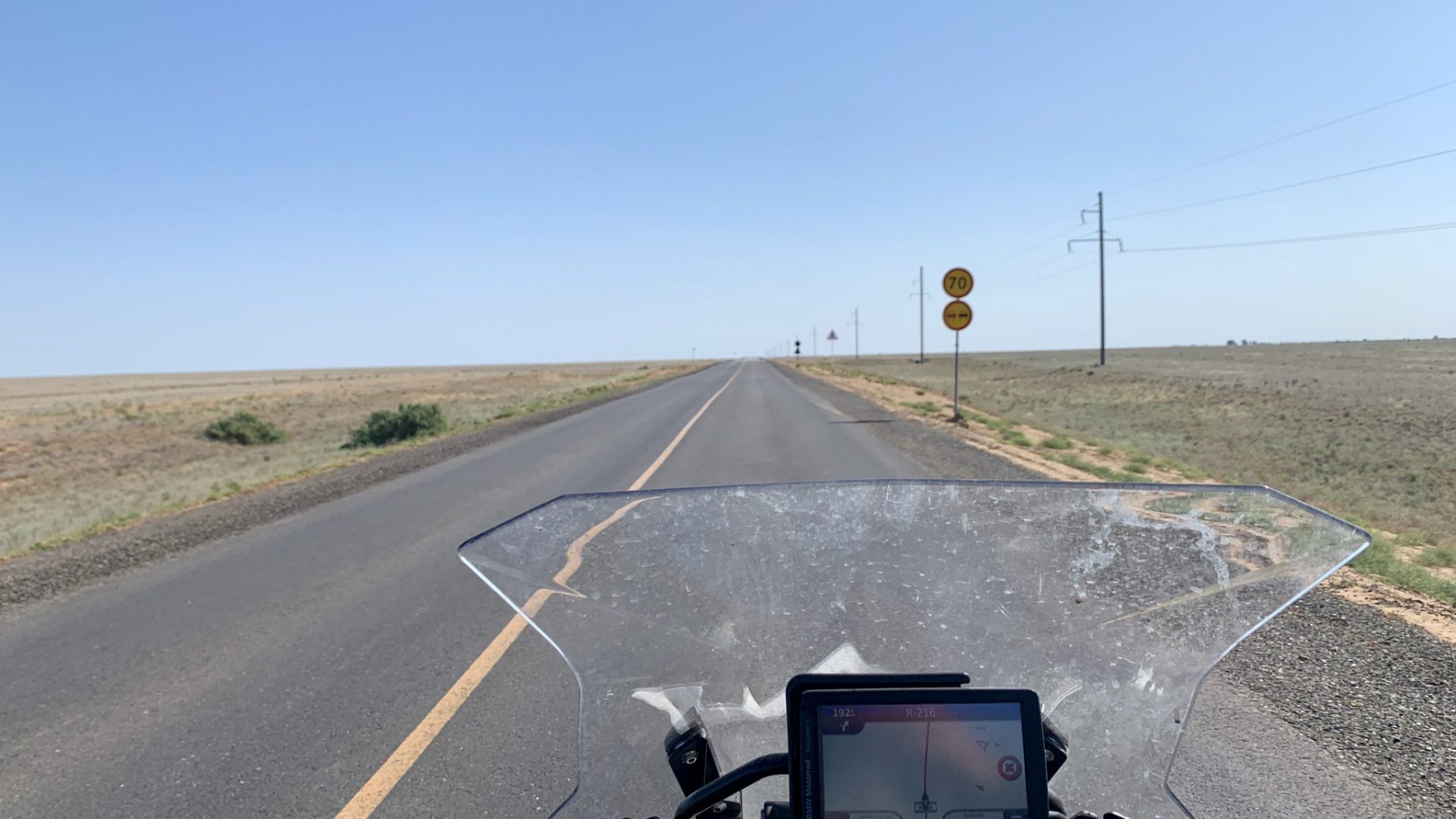 It’s a bit of a strange feeling that I’m driving from Almaty back to Bishkek. I know that the journey is over now and I have started my last kilometers. In the course of the trip I had built up a reasonable daily rhythm. There was a clear system in packing the luggage and everything had been given its own place on the motorbike. Now that I had been in the same place for a couple of days, the stuff was scattered around the hotel room and I was constantly losing things. On the first day in Almaty I didn’t really know what to do, but preparing the bike this morning felt familiar again.

I also realize that I have become very accustomed to the environment and the habits here. What felt uncomfortable in the beginning is now almost self-evident and I find much less ‘weird’. When I’m driving on a highway I’m not surprised anymore that a cyclist comes from the opposite direction on the left lane; that an old car almost sinks through its axles because luggage is stacked in three layers high on its roof, including a refrigerator; that a road worker holds you up and asks if you have some water for him; that completely unknown people come to you and give you a hand; that you are invited for a cup of tea at a refuelling session; that someone hands you unsolicited fruit while you are at a traffic light; that the toilet is a hole in the ground at the back of the garden, between the corrugated sheets and surrounded by flies; that someone smiles at you and sees you with a mouth full of golden teeth; that people constantly ask you what your bike costs. Even a selfie at someone’s request is almost self-evident.

If you make a longer trip, it will take a while before you realize that it is not a holiday that ends in two weeks’ time. You divide the trip into manageable parts and there are also practical things like buying toothpaste, going to the hairdresser, doing maintenance on the motorbike and taking some rest now and then. The latter was particularly important to me, you can’t spend months on the bike every day without taking the occasional rest and processing all the things you’ve been through. Also you can’t be a tourist everywhere, for me there is a limit to the number of mosques, panoramas, cities and the like that you can see. Occasionally I take something with me, but for me the landscape, the meeting with locals and other travellers was actually the thing that appealed to me the most.

Surprising how countries differ from each other. In the past the boundaries were often determined by the contours of the landscape. Sometimes this is a river, but in the case of Uzbekistan’s border with Tajikistan, for example, there was a clear transition from desert to mountainous areas. The mountains in Tajikistan were extremely beautiful but the vast hot, arid deserts of Uzbekistan also had something enchanting. In the Netherlands it is not possible to drive five hours in a row and not see anything at all, sometimes not even a bend in the road. The hot wind made it heavy from time to time but it also had something meditative.

I didn’t know exactly what to expect from Turkey, but I’m sure I’ll be back there again. The people there are extremely gas-free, by our standards, the landscape is very varied. From the beautiful coastline with the Black Sea to the mountains more inland. I found it special to follow the river Euphrates for two days, the green vein in the brown and arid mountains. Turkey also offers plenty of opportunity for the motorcyclist to go off-road. The D915 was quite exciting but when I look back I have become very confident on unpaved ground. The bike also did a great job and I didn’t have any problems, not even a flat tire.

When I come home it will take some getting used to, but on the other hand I’m also looking forward to our raked and predictable little country. We have arranged everything very tightly, maybe a bit too tightly; you should try to take your bike with you in a taxi in Amsterdam; a day too early to put your gray bin on the road; eat a watermelon from the market in a restaurant; let your cattle run loose on the street; light a bbq in a public park and so on. Still, we arranged it well and I am glad that I live in the Netherlands and can enjoy the occasional irregularity somewhere else.

When it comes to hospitality, we’ve lost a lot of ground in the pace of increasing civilization. Family and friends are more important in Central Asia and the ties are intensely maintained. Eating is a social event rather than a functional act, as is the case with us. When there is food there is always room for an extra mouth, when there is not enough there is simply better sharing. It is inconceivable that an (unknown) traveller is not welcomed and cared for in a hospitable way. In any case, I have decided to bring some of that hospitality with me…. (Watch this space)

De The engine is now ready for transport, eventually it will be placed in an iron frame and it will be transported to the Netherlands. The paperwork for customs is done as well, I leave early on Wednesday morning for the airport. By the end of the day I am back in Warmenhuizen.

I’m home now. The flight went well, a total of 9 hours flying. Anja, Lars and Daphne were waiting for me at Schiphol. I knew Anja, but the children were a very nice surprise. Once at home, I took a shower and sat on my own, clean couch. The doorbell rang and kept ringing, I think a total of thirty people who came to welcome me home. Moving and super fun! In the following days I was regularly addressed by people who read the newspaper article and therefore the Blog, many positive reactions. Back to work on Monday, no travel on the program for the time being. Also not thinking about it for the time being……….although………………………………………………………..